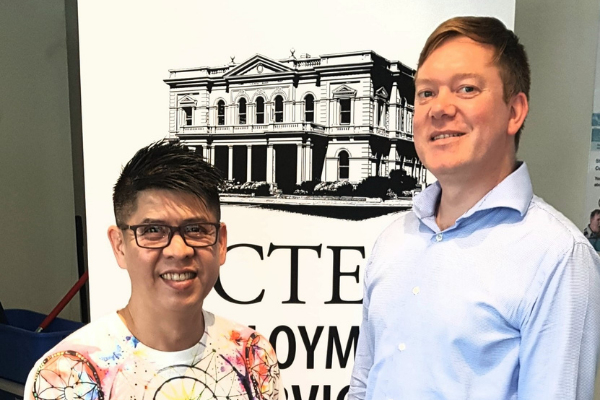 Meet Tanatsak. Everyone likes to call him Dome.

Dome is a strong-willed, energetic go-getter who longed to get back into the workforce. Having not worked since 2015, Dome was seeking the freedom and socialising employment offers.

Dome suffers from ongoing joint paint, also known as rheumatoid arthritis. He was struggling to see how he could get back into the workforce. To get help finding the right job Dome contacted OCTEC via Facebook.

Joshua in our Surry Hills office got in contact with Dome to get started with finding employment. Dome was excited to get his life back but was afraid. He previously struggled with reporting his income to Centrelink, causing him to have to pay back a debt.

Joshua reassured Dome of what their next steps were. These included highlighting Dome’s strengths to update his resume, working through any barriers he may have and finding jobs he was interested in. Working through Dome’s resume, Joshua noticed that Dome’s qualifications in RSA and RCG were out of date. Having had these certifications before, Dome was interested in redoing them as he had experience working in those areas. OCTEC paid for Dome to be enrolled in these course which he successfully completed.

Once Dome’s resume and potential jobs were complete, Joshua and Dome started to contact employers and apply for jobs. Dome secured his first few interviews. With the help of OCTEC, was fitted out in new business clothes for his meetings. Even though Dome was not successful in the first few interviews, he came back to the OCTEC office and Joshua helped him find and apply for jobs in various industries.

Through his and Joshua’s consistency Dome secured a position in retail as a brand ambassador for Heinemann Australia, located at Sydney International Airport. Heinemann Australia is the largest Tax & Duty Free shop inside Sydney International Airport offering products from around the world. Dome’s RSA and RCG qualifications ensured he met the job requirements for this role. This allowed him to manage the alcohol taste testing within Heinemann.

Joshua reminded Dome that he would explain the process of reporting his income now that he has secured a job and assured him he is only a phone call away if he needed any help.

After a few weeks in the role, Joshua checked up on Dome. Dome mentioned that his arthritis was causing him a lot of pain due to long hours standing as part of his role. OCTEC supported Dome with the purchase of new orthotics for his shoes which decreased his joint pain immensely. Joshua suggested for Dome to also check in with his GP and explain his new job for more assistance with his medication and to also see his chiropractor more regularly until his body adjusted to his new role.

Dome did just that. He stuck it out, got the help he needed and continues to be employed full time. Dome is so happy to be back in working life and his high spirits are a constant inspiration to not only the OCTEC staff but to everyone around him.